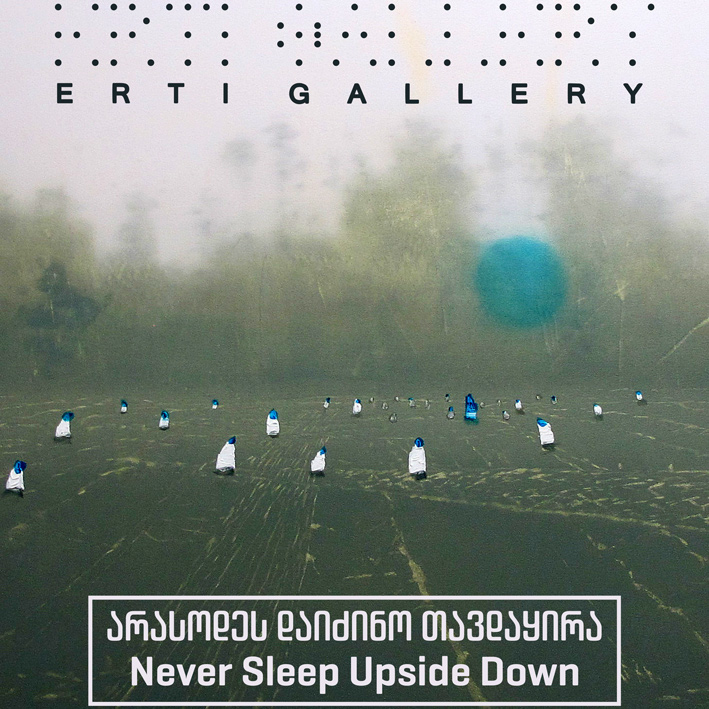 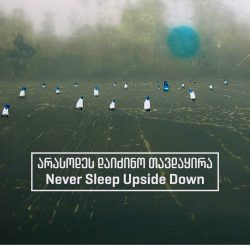 For thousands of years mankind is trying to make its own mark in time and space, from were to start its own rout. The trajectory defined by utopian ideas and bureaucracy leads crowd to the utopia again.
To question any consequence is a priority of Homo Sapience. During its existence and evolution the humanity puts the understanding about truth and justice under question… Hence, each of the attributes is versatile, deep and unexplainable, it is impossible to put them in any frame or make their generalization.

The exhibition presents multimedia installation, which gives the association of galaxy.
A mankind is the only creature on earth, able to perform the act of looking at the sky with defining it in various content and motivation. For every individual “looking upwards” is related to intimacy and often indicates to having the sort of skill feeling infinity, inaccessibility, hope and deep sensibility, which is often doomed or forgotten by life routine. The text “Never ask me, what I am doing on the roof of the house” underlines mystical feelings, which artist experiences in this case.

Multimedia installations and canvases – landscapes with blurred horizons with mystic and surrealistic moods – depicts private transcendental feelings and psychological conditions, which usually accompanies the issues of existentialism and the search for the blurred future, which itself is an utopia.

A mushroom is a multifunctional organism on earth. One of the sort of it is “Amanita Muscaria”, which has the effect of losing fear of anything, getting crazy and having some hallutinations. Historically It is known, that the people of north used to drink particularly this mushroom bullion before the war, and afterwards the victory was becoming inevitable.

Installation “AMANITA MUSCARIA” is the condition of a man, freed from any kind of fear, with a dualistic and utopian opportunities, when there are no boundaries, trajectory or any route…
Tato Akhalkatsishvili graduated from Tbilisi State Academy of Arts (1996-2003) were he was a member of “Figurative Art Studio”. The studio had a great success in Germany. Since 2000s Tato’s artworks have been mainly exhibited abroad. Twice in Tokyo (“Mitsukoshi” Art Gallery) and regularly in Europe and USA.